Photo by Rishi Ragunathan on Unsplash

Crypto Comics - What is Aping

I tried to explain what Aping is in comic strips.

I explained what Aping is. 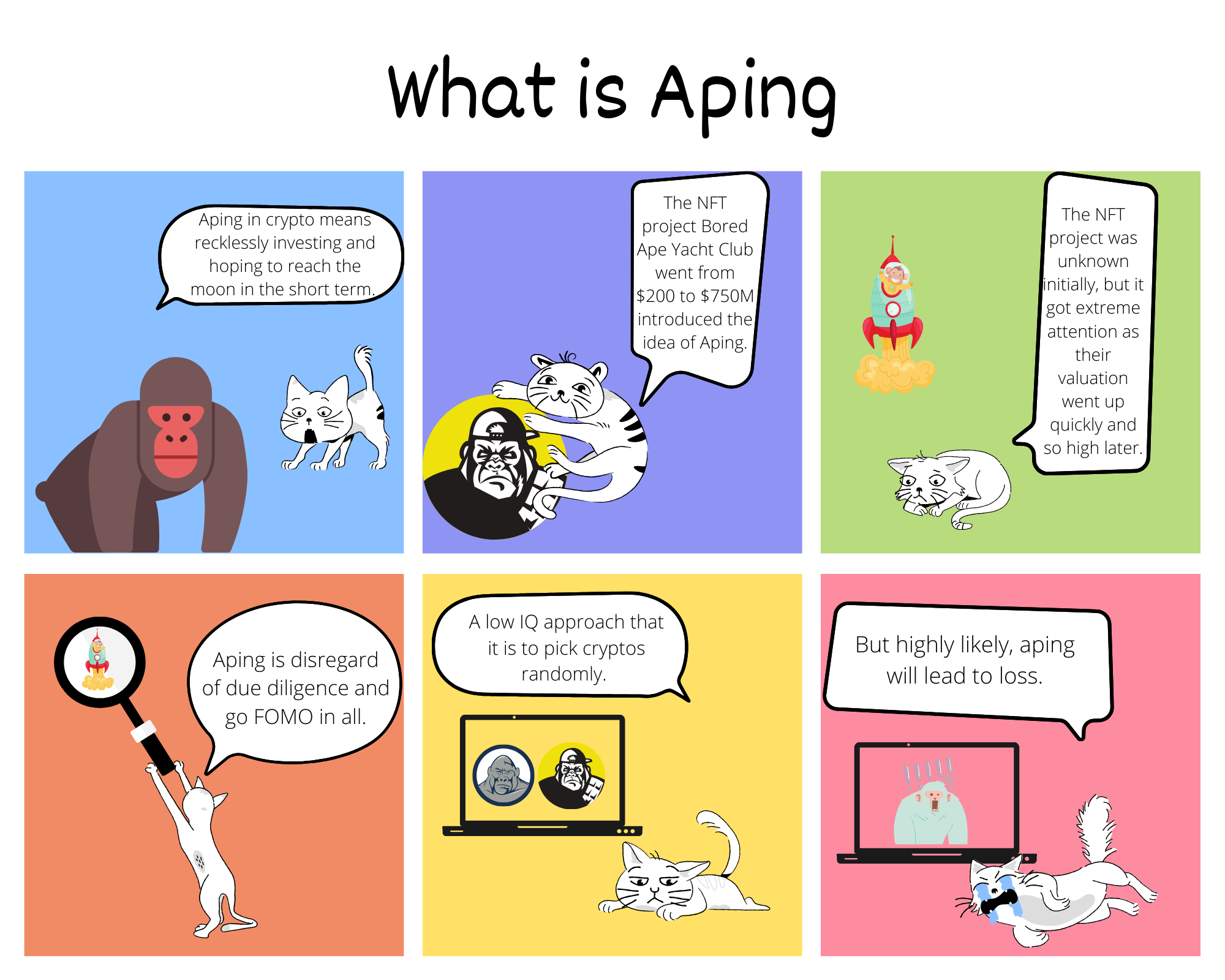 Aping is not pretending like an ape and running around. Aping is a way to trade crypto recklessly. The phenomenon is from the NFT's successful marketing project called Bored Ape Yacht Club. It is an NFT exclusive society and membership is to sell NFT of each different style of unique cartoon apes images. People may question why such cartoon apes' images value more than $750M. Nobody knows. But we observed that such NFTs were owned by celebrities like Stephen Curry and many others. Some may say such NFTs are scam projects to lure people to buy them up the valuation and dump them later. Some may say such NFTs are truly collectibles. Such debate will continue going on. However, the ripple effect creates hype for many people to overheat the NFT space. Aping is one of such hype created specifically for those people who jump into NFT projects or other crypto projects carelessly and try to get rich overnight.

Aping is a mild term rather than Apeing which is more intensive. Apeing is an all-in move that people FOMO and want to ride the trend, while aping is trying to all-in and push others to join.

Aping will likely encounter a pump and dump. By hoping one asset will have a 1,000% return overnight, you will bear a huge risk that is likely to lose all your funds. Rather than aping every investment, you want to learn the project while observing how the project evolved to become.

Aping phenomenon dies out fast. Since the NFTs market cools down fast, the crazy valuation of the project is rare. Also, many more scams are easy to spot from the blockchain, people are doing more due diligence than ever before.

The meme phenomenon survives. People will remember such crazy NFTs projects in the future. And how crazy people rush into space to take advantage without thinking through. Many are losing their funds but they also learned lessons from such a trend. Aping becomes a way to meme an NFT project that potentially will rug pull people.

Aping is bad. But the Aping meme is actually good for people to raise alarm in the NFT space.

Note: Cross-references of this article have been created by the author and have been cross-referenced on multiple platforms here. Please reference resources and credits on the video. Reach out to the authors if you have any questions.